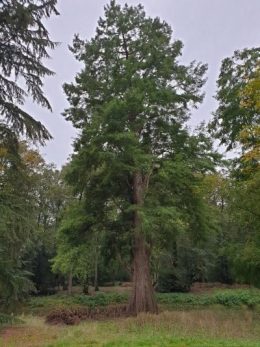 Monumental trees in the national register

The number of monumental trees at Huis Landfort was much greater before 1945 than it is now. Fortunately, there are still seven monumental trees on the Kleine Erf (house island) that appear in the Bomenstichting’s (Tree Foundation) national register of monumental trees. We are particularly proud of these trees, which include an American tulip tree, bald cypress, two hornbeams, a white walnut or butternut, Dutch lime and an oak-leaf beech.

The fact that trees played an important role for the Luyken family at Huis Landfort is demonstrated by a publication that appeared in 1941 in the German magazine Mitteilungen der Deutschen Dendrologischen Gesellschaft upon the death of Bertha Luyken-Schlimmer (Gorsel 1855 – Huis Landfort 1941), the wife of Albert Gustav Luyken. She also had a great interest in special trees, some of which can still be admired, such as two impressive hornbeams and some bald cypresses.