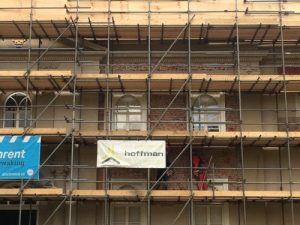 The plastered facade is a typical feature of Huis Landfort. The house is neoclassical in design and such white-plastered facades fit perfectly. Although the plaster layer still looked fine, it is necessary for proper repairs to remove and then reapply it. Some parts of the plaster layer were loose on the facade. On a side-note, the building’s history revealed itself when the plaster layer was removed. The removed layer consisted of the non-porous portland cement., which was disastrous for the old brick facade because all the moisture remained in the bricks. The new plaster layer will be made from old-fashioned lime mortar. This is better for the wall and also gives the building a historically correct appearance. The removal of old layers of plaster is referred to in technical terms as ‘de-rendering’. A de-rendered wall can be repaired more easily and rusted wall anchors from earlier centuries will also be replaced. When that work is done, a strong base for a new plaster layer will automatically emerge. The foundation has also engaged the buildings archeologist Peter Boer (Arcx) to carry out additional archaeological building research now that the plaster layer has been temporarily removed.